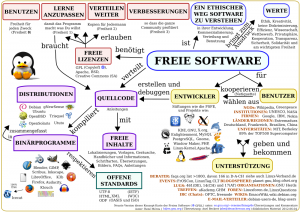 Photo: By Unknown photographer who sold rights to the picture to linuxmag.com [GFDL or CC-BY-SA-3.0], via Wikimedia Commons 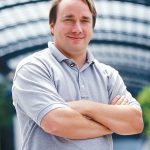 GNU, which stands for Gnu’s Not Unix, is the name for the complete Unix-compatible software system which I am writing so that I can give it away free to everyone who can use it.

GNU is not in the public domain. Everyone will be permitted to modify and redistribute GNU, but no distributor will be allowed to restrict its further redistribution. That is to say, proprietary modifications will not be allowed. I want to make sure that all versions of GNU remain free.

We want to replace proprietary software, with its unjust social system with Free Software and its ethical social system. And so we develop free replacements for proprietary software, and other free programs whenever we get an idea, so that the world can live in freedom. The part that uses computers, at least, in that one area of life. Because winning and maintaining freedom in general is a much bigger, much broader and harder activity, but this is one part of it. 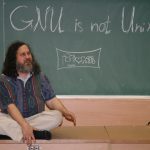